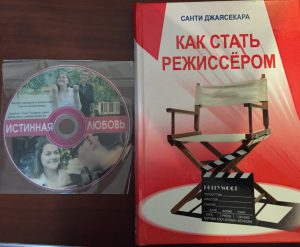 Santhi P. Jayasekera is a truly unique personality. Being a native of the Republic Of Sri Lanka, he has been living constantly in Leningrad (St. Petersburg) since 1981, where he graduated the State University of telecommunications n.a. M. A. Bonch-Bruevich (Leningrad electrotechnical Institute n.a. Bonch-Bruevich) in 1987.

Shanti P. Jayasekera is a founder and permanent director of the International University of Fundamental Studies (IUFS), created by him in St.Petersbueg in 1998 and since 2007 he has been the President of the Intergovernmental Higher Academic Council

(IHAC), today the International Higher Academic Council (IHAC) as associations of Word scientists. Under the guidance of Shanti P. Jayasekera, IUFS and IHAC have become the scientific and organizational centers, recognized in the modern world that are paving fundamentally new paths in science and culture.

Shanti P. Jayasekera is continuously and successfully engaged in diverse research and creative activity in various fields of knowledge (philosophy, history, jurisprudence, informatics, international security, medicine, cultural studies etc.).
It is the insatiable and constant creative impulse that brought Santhi P.Jayasekara to St. Petersburg Institute of cinema and television, which he graduated in 2015, having created an original film “True love” as a screenwriter and director (supervisor Professor S.Ovcharov). In this film, first time in the world cinema, all the characters are people with “physical disabilities” (blind, deaf, hard-of-hearing), and the entire drama of the film is built on their very complex and intense relationship. True love plays there a crucial role. The film shows that all people have truly inlimitless spiritual possibilities that make their lives full and wonderful and love is really powerful.

The book has a meaningful and promising title “How to become a director” that is consistently and convincingly revealed in the book’s structure and content, fully justifying its name.

The structures and contents of the book are both original.

Santhi P. Jayasekera rightly believes that it is possible to become a real director by understanding the history of world cinema in a creative way. The originality of Santhi P. Jayasekera’s approach to such stories is that he gives a deliberately selective history of world cinema (USA, Russia, France, Italy, Germany, India) as an individualized process, the history, objectively and subjectively important for the ongoing development of world cinema and especially for the professional development of the director in the person of Shanti P. Jayasekera. His experience in this regard is typologically significant

The book provides expressive portraits-sketches of outstanding figures of the world cinema, which had particularly noticeable effect, as he believes himself, on the director,- Santhi P. Jayasekera. These are C. Chaplin, T. Guerra, E. Kusturitsa.

The specificity of narration in the book of the most varied material is that, first the author gives some preliminary sketch and then a detailed picture of what the author narrates repeatedly in detail in the future. This makes different information provided by the author, more impressive and consistently memorable.

Especially expressive and original in the book are the essays on the portraits of Charley Chaplin and Tonino Guerra. Shanti P. Jayasekera knew personally Tonino Guerra and the whole essay-portrait of the well-known writer is imbued with subtle lyricism and even a unique intimacy.

Considering contemporary cinema and especially television, from the point of view of their technical perfection, Shanti P. Jayasekera astutely notes that new technical tools play an important aesthetic and creative-visual role in this case, allowing to create emotional and intellectual effects, previously inaccessible for cinema.

Santhi P. Jayasekera shows the ambiguous role of money for cinema production. Without money the production itself would be impossible, and at the same time the investor’s money create a dependence on them in the entire filmmaking process, including the conceptual-creative process. There must be a genuine interaction of both sides, useful for filmmaking.

The Director’s profession may require the truly unique historical knowledge. The author demonstrates it clearly when talking about the special and possible investor (Principality of Seborga) for the production of cinemas, conceived by director Shanti P. Jayasekera.

The artistic story of the creation of Santhi P. Jayasekera’s film “True love” takes a special place in the book. It reveals inside the entire mechanism of cinema appearance: from the script up to on-screen demonstrations. It is also typologically instructive and not only for young directors. It presents the process of creating the script, and you can find the assessments of the finished film by its various and influential audience, of course deservedly positive.

Rich in the most varied and instructive material, written in a lively and entertaining way, the book by Shanti P. Jayasekera “How to become a director,” will be perceived with interest and benefit by the experts in various fields and a wide range of reader interested in cinema and the process of its creation.


Warning: count(): Parameter must be an array or an object that implements Countable in /home/mvus1/apollon.me/docs/wp-includes/class-wp-comment-query.php on line 405